Which CPA Review Course Is Right for You?

With my comparison of the most popular CPA review courses, you can get the best course for you!

There has always been numerous requests on statistics related to CPA India: be it the pass rates, number of candidates, number of retakers, trends and so on. I’ve finally got hold of the 2013 data from NASBA, and will be able to get the latest 2015 version shortly.

Number and Profile of Candidates

There were 428 candidates applied directly from India. The average age was 28.8 and 65% were male candidates.

Judging from the emails and facebook comments I got in the past 5 years, there are actually a lot more Indian candidates if we are to count those who reside in the US (the international students, H1B and H4 visa holders, and green card holders). These candidates are grouped under the US pool.

About 60% were first-time takers and the rest were retakers.

The pass rates for first timers were 42.1%, only slightly higher than the retakers at 40.2%. 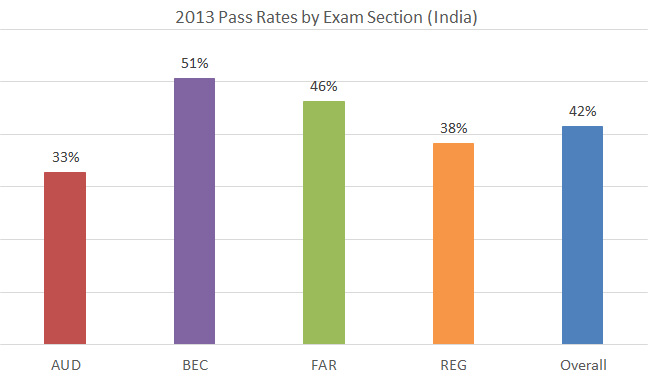 Indian candidates achieved the best results in BEC at 50.6%. This is in line with the trend on a global basis.

AUD had the lowest pass rate of 32.8%. As shown in the chart below, the difference between Indian and global performance was also the biggest. 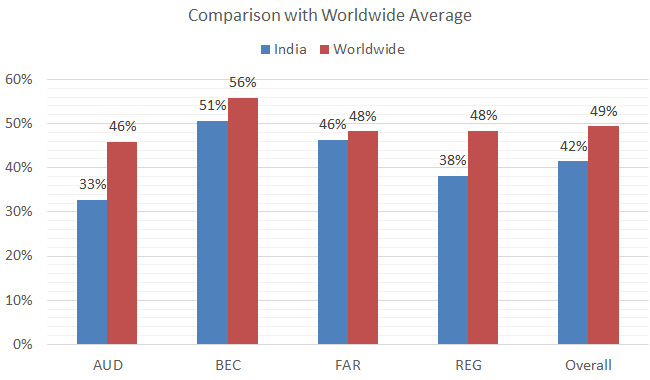 This is possibly due to the fact that Indian candidates get confused withe US GAAP. Also, the AUD questions tend to be more wordy and complex, and therefore is harder to comprehend for international candidates.

The difference in REG is also quite distinct. The majority of REG coverage is on US taxation. It is understandable that Indian candidates find it more difficult to comprehend and memorize the complex rules of various US taxes.

Fortunately, for FAR, there were only 2 percentage point of difference between the Indians and global average. FAR has the widest coverage but most questions involve calculations with clear, distinct answers. This shows the relative strength of Indian candidates in computational questions.

Number of Candidates and Pass Rates by Age

NASBA provides other interesting stats, including the split by age. 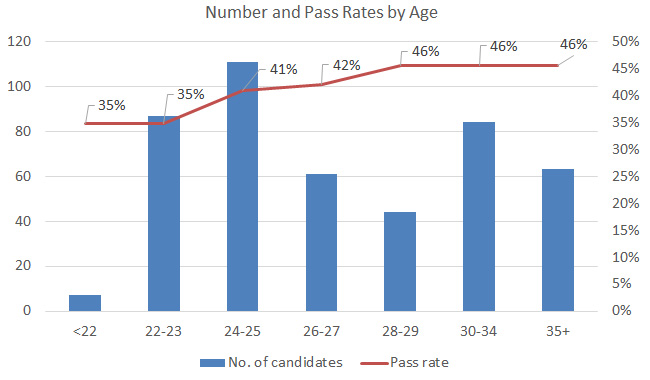 (x-axis: age in terms of number of years; y-axis: number of candidates)

A large group of candidates took the exam shortly after graduation (22-25 years old), then another group taking the exam in their early to mid thirties.

The pass rates crawl up nicely as candidate’s age increases. This is a complete opposite to the global trend in which the younger candidates did better.

It’s hard to analyze this difference without further data, but I can think of the following as possible reasons:

How Long Does it Take to Complete the Exam?

On average, successful candidates from India take 12-18 months to complete the CPA exam.

The bar chart below shows the number of Indian candidates who passed the last part of their exam in 2013. For example, 26 candidates passed all within 6 months, 26 between 12-18 months, and 34 requiring more than 24 months to complete. 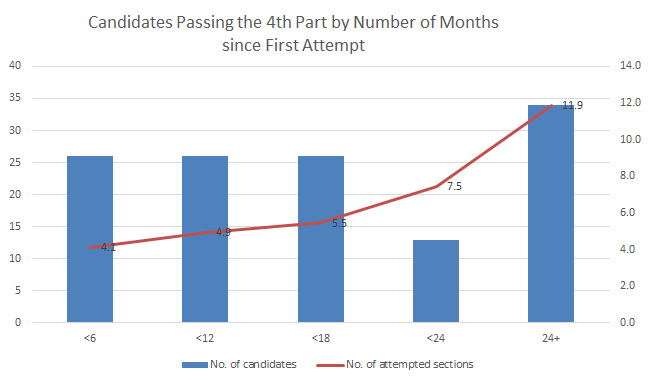 The line shows the average number of attempts required to pass the 4 parts. For example, for those who are done within 6 months, they need 4.1 times; while for those requiring more than 24 months, they tried 11.9 times.

Note that this only includes successful candidates, meaning those who passed all 4 parts in the end.

Did Candidates Try to Finish the Exam Quickly, or Dragged On?

The chart below shows how long the candidates wait to take the second attempt (either new or retake). It indicates how frequent the candidates take one part after another. 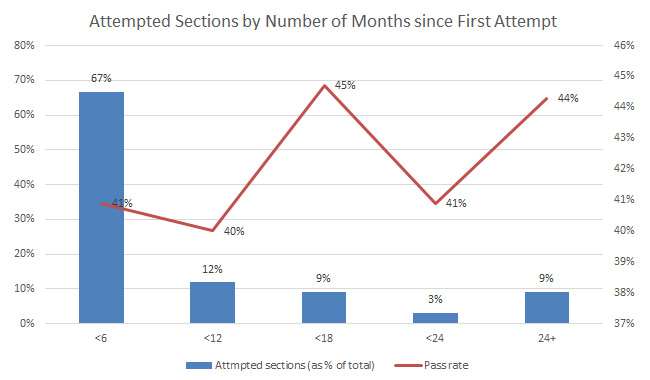 67% of attempted sections were taken within 6 months of the beginning of the exam process, compared to <50% globally. This implies that Indians want to get the CPA exam done quickly.

Does moving on quickly or slowly affect the pass rate? Not in the case of Indian candidates, but for the global average, pass rate decreases as candidates drag on for longer.

The following charts show the percentage of “comparable” or “stronger” on the candidates’ score report. This has similar implications as pass rates. 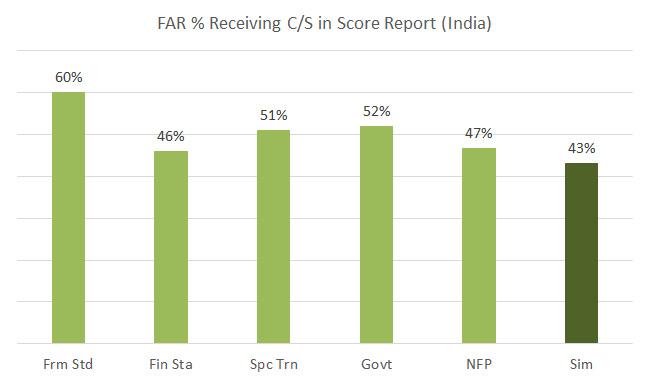 Indian candidates did the best in “Framework and standards”, which is the more theoretical part of FAR. The rest are within a narrow range of 46-52%.

The slightly slower performance in “Financial statement accounts” may due to the difference between Indian and US GAAP. Governmental accounting, traditionally an area dreaded by international candidates, has a surprisingly high 51.8%.

Simulations is another area that Indian candidates can work on. The percentage (43%) is noticeably lower than the global average at 50%. 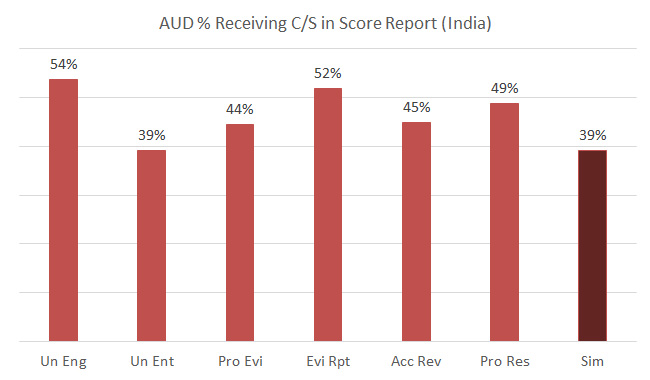 In AUD, the performance of each content area varies considerably. Indian candidates may want to pay more attention to “understanding the entity”: the performance (39%) was lower than the global average by 19 percentage points. Other potential areas to work on include “Accounting and review services” and “procedure and evidence”. 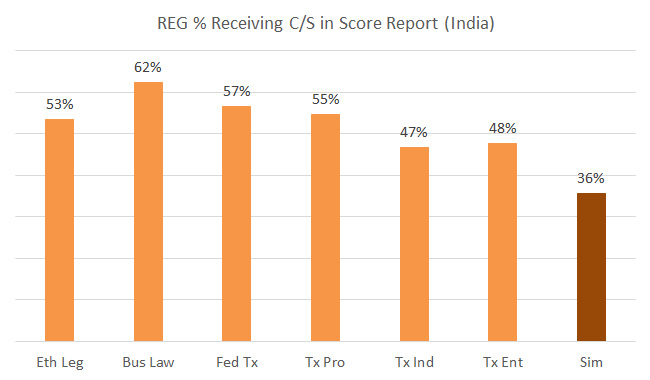 Indian candidates did well in business law in terms of both absolute and comparable comparison with the global average.

Another good news is that the difference of Indian vs global in taxation was smaller than I expected (around 5-7 percentage point).

Need to work on the ethics section as Indian candidates were scoring at 53% vs the global average at 70%. 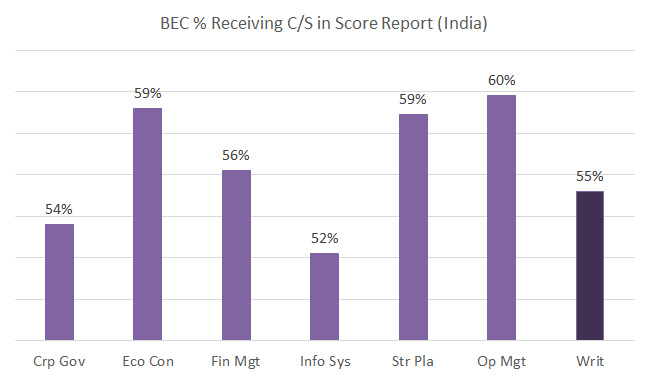 Indian candidates’ performance was comparable with that of global average, except for information system and written communications. Even so, the results were good overall with all areas above 50%.

What Does It Mean to CPA Indian Candidates?